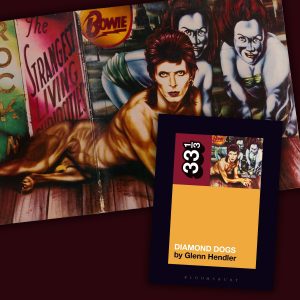 Tosh and Kimley discuss David Bowie’s Diamond Dogs by Glenn Hendler from the 33 1/3 series. Diamond Dogs is frequently considered one of Bowie’s best albums by critics and fans alike. It’s an album that was stitched together from the detritus of a failed 1984 project and his reading of William Burroughs’ Wild Boys which impelled Bowie to use the cut-up technique in his lyric writing. Bowie’s cryptic lyrics are ripe for the kind of OCD examination that the 33 1/3 series allows. And given our current virus-laden era of social distancing and big brother-like policies emanating from the powers that be worldwide, this feels like an album for our time.