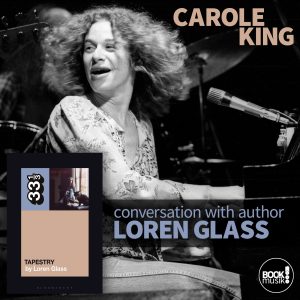 Tosh and Kimley are joined by author Loren Glass to discuss his new book Carole King’s Tapestry (33 1/3). Carole King is one of the most successful songwriters of the 20th century. From her early Brill Building days writing hits with her first husband Gerry Goffin to this iconic solo album that broke sales and chart records as well as glass ceilings. Glass makes the case that Tapestry was not only the soundtrack to but also part of the engine for the women’s movement. Whether or not you’re a fan of Tapestry, you inevitably love many of her other hits as sung by the likes of Aretha Franklin, Dusty Springfield, The Beatles and many of the early girl groups. Her back catalogue is still being mined regularly by more recent artists solidifying her legacy for many years to come. 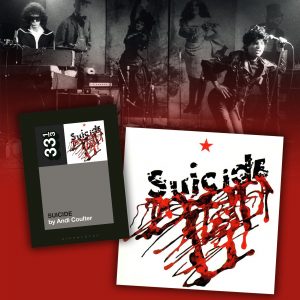 Tosh and Kimley discuss Suicide’s Suicide by Andi Coulter from the 33 1/3 series. Suicide was a band comprised of Alan Vega on vocals and Martin Rev as the sole multi-instrumentalist. Spawned from the wreckage of 1970s New York, the band never seemed to find a wide audience but those in the know who were lucky enough to have seen them perform live were the participants in a show that surely would not be forgotten. Typically described as an assault to the senses with a strong vibe of imminent violence, most people didn’t quite know what to make of them. But as so often happens with cult artists, their influence casts a wide net and continues to do so to this day.