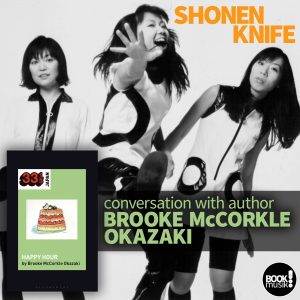 Tosh and Kimley are joined by author Brooke McCorkle Okazaki to discuss her new book Shonen Knife’s Happy Hour: Food, Gender, Rock and Roll Shonen Knife, a trio of women from Osaka, Japan have been sharing their own special brand of rock and roll since 1981 and are still going strong. Often referred to as a Japanese version of the Ramones, they have expanded far beyond that early comparison. Recording in both Japanese and English, they’ve built a worldwide fanbase. Singing about food is a dominant theme and they’ve found a way to unexpectedly mix cute with cool. Brooke makes it clear that there is no pigeonholing this hugely influential and eclectic band.